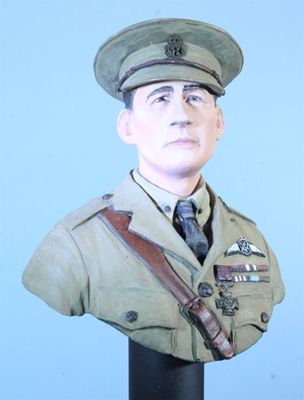 James McCudden remained in England until July 1918 when he was given command of No. 60 Squadron RAF. He flew to Farnborough in a Vickers F.B.16 to collect his new Royal Aircraft Factory S.E.5a before returning to France to lead his new Squadron. On 3 July he flew back in this fighter and over his home in Kingston upon Thames, taking the aircraft to 17,000 feet and circling London for an hour. When he landed he made his last entry into his log book. His total flying time had reached 872 hours and 40 minutes.

On the of 9 July 1918 Hounslow where he climbed into his S.E.5a (C1126). He took off shortly after 13:00. McCudden certainly stopped en route, as about six o'clock that afternoon he called the AOC No. 13 Wing, Patrick Playfair, to announce his imminent arrival at Boffles, where No. 60 Squadron was stationed.

James McCudden set out across the English Channel. Unsure of the dispositions on the ground after the German advance he checked the airfield he suspected to be Boffles but found it empty. Flying in heavy mist he decided to head to Auxi-le-Chateau, France, to get directions from the RAF personnel stationed there. He approached Corporal W.H. Burdett and L. E Vallins of 52 Squadron. Burdett had served with McCudden in 3 Squadron back in 1915. Burdett did not recognise him in his flying gear. They marked his map and McCudden returned to his machine. Around 90 seconds after takeoff from Auxi-le-Chateau, the S.E.5a plunged into the ground. 8 Squadron's Corporal W.H. Howard was on the scene within minutes and fought through the fire to free McCudden who was lying next to one of the wings he had not worn his safety belt. Burdett followed and recognised the pilot as soon as his headgear had been removed. He was taken to No. 21 Casualty clearing station and diagnosed with a fractured skull. He did not regain consciousness and died at 20:00.

Corporal Burdett later stated, "When McCudden took off he put the machine into a nearly vertical climb, seemed to do a half-roll and then nosed dived into a wood.....it was usual for scout pilots to perform some little stunt.....I think that is what he was doing." Witness Lieutenant L.M Fenton had a different view, "the aircraft took off into wind and at about 100 feet did a vertical turn and flew back across the aerodrome by the side of the wood. The engine appeared to be running badly. The pilot rolled the machine, which failed to straighten out, at approximately 200 feet. It crashed nose down into the wood." Lieutenant T.H Barry, though supports the notion that something was amiss with the engine: "I saw an S.E.5 flying from west to east across the aerodrome at 200&ndash;300 feet. The engine was firing irregularly. Just after crossing the end of the aerodrome the pilot did a sharp stalling turn. The nose dropped, and it dived behind the trees. During this dive the noise of the engine ceased."

McCudden's remains were subsequently buried at the nearby Wavans war cemetery in the Pas de Calais.[84] McCudden's death occurred only two months after the death of German ace Manfred von Richthofen, whom some commented had been honoured with a longer and more elaborate funeral by the British. McCudden's wartime score was 57 victories included 19 captured, 27 and 1 shared destroyed, 8 and 2 shared "down out of control"&mdash;an official classification which still counted the claim as a victory.